All this talk of birthdays for the last week or more has got me wanting to write about part two of my 30th birthday celebration last year; The Great Ocean Road! 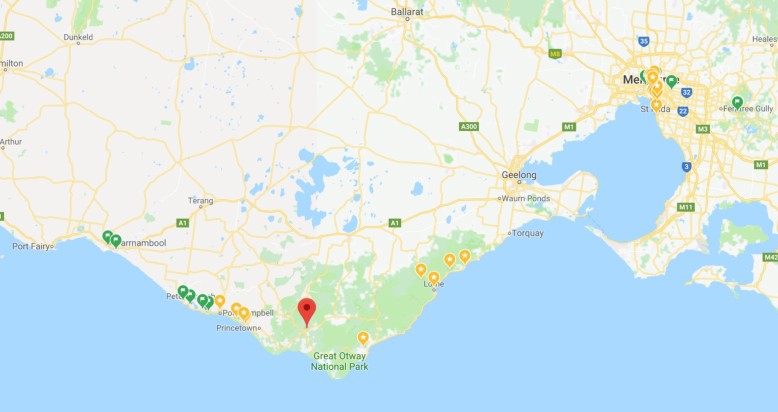 After some heavy city birthday celebrations at St Kilda and the centre of Melbourne we fought the traffic and got out of the city. We went straight passed Geelong and into Torquay, where un/fortunately they had some sort of market going on. I loved it, the Irish… not so much. He said he came out of the city to see some nature, not more trinkets. Meh. After the market, (because yes I did get my own way and we stayed for a while) we headed past Anglesea and towards the first star on that map Split Point Lookout. As nice as Torquay is, this is where we got our first taste of the amazing scenery! 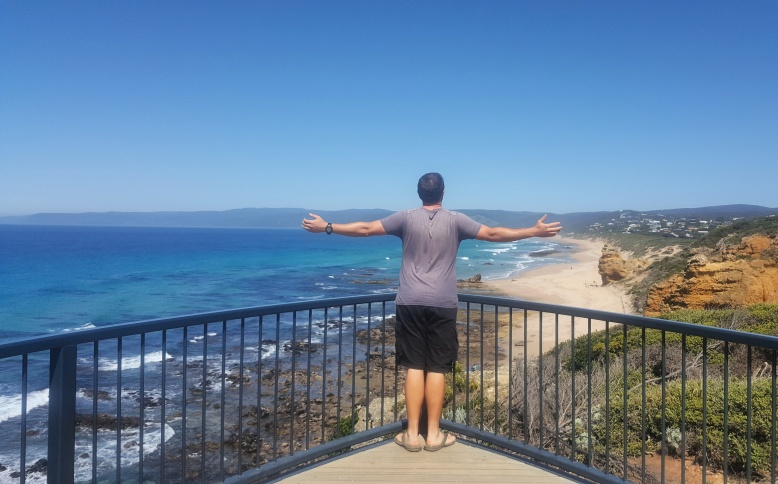 I didn’t walk up to the lighthouse at first, not before Sean scoped it out, I think they “Beware of snakes” sign freaked me out a little. Plus I had had a terrible nights sleep so wasn’t in the best of moods. A bit of coaxing and coffee though and I finally got out of the car, thankfully I was rewarded with a great view!

Still a little grumpy and tired I fell asleep on the way past the Memorial sign! Sacrilege. Luckily Sean is amazing and drove us all the way back so we could drive it again! Yep, we didn’t drive the Great Ocean Road one way, we doubled back on ourselves quite a few times during this trip. I’ll say it’s so we got to see it from the other side but really it’s just because we kept missing things out accidentally. This happened more times than I care to admit.

We finally made it to Lorne, in the evening we treated ourselves to a fancy meal, which was nearly stolen by some brazen cockatoos! 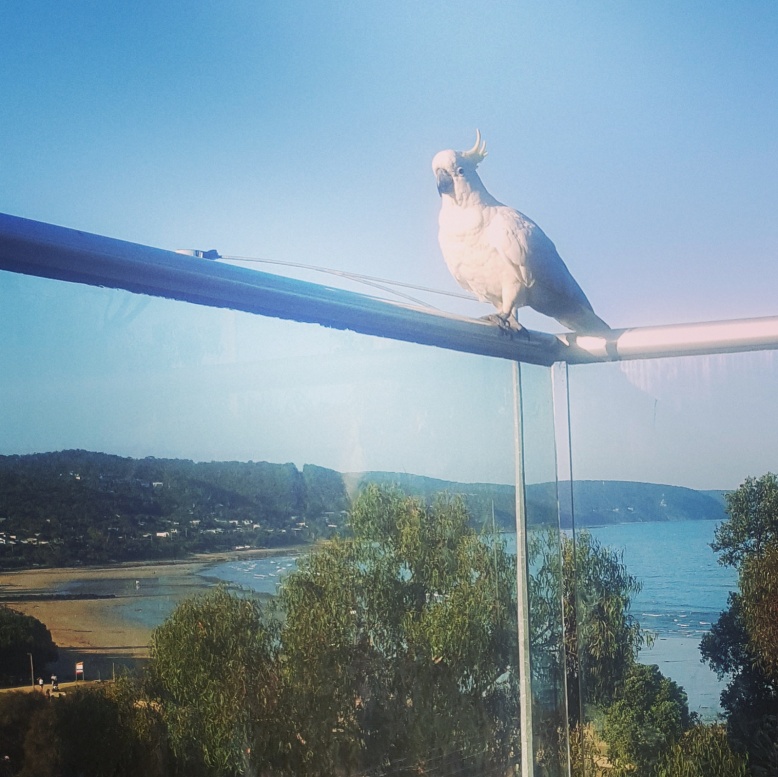 Speaking of the wildlife down here is fantastic! We had a dip in the sea at Port Apollo but stayed at Marengo Holiday Park just past Apollo Bay where Sean saw seals one evening whilst I was painting.  Which, was the best night of the trip aside from the spider under the toilet seat incident.
He also swam with stingrays at Port Campbell and there are huge black, red-tailed cockatoos here not just the white and yellow ones.  Be careful not to feed the wildlife though.  I don’t think it’s a great idea.

More wildlife as we went hunting for giant carnivorous (I read flesh-eating) snails in Great Otway National Park! I preferred our earlier stop at Erksine Falls, I like the waterfalls and Otway is really dark! Very little sunlight makes it down onto the boardwalk through the forest. My imagination went a little mad.

The drive from Lorne to Marengo is my absolute favourite part of the drive, it’s practically on the coast.  Be careful, if you’re not paying attention you could go off into the sea! 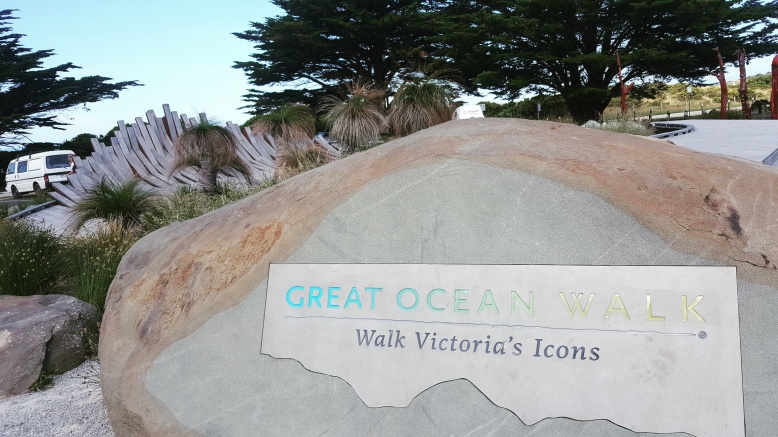 After a quick stop slightly inland at Lavers Hill, (Oh! Get your supplies in Apollo Bay! There’s very little of anything we would usually want to eat.) it was time to start ticking off the touristy rocks.

Now there’s a lot more to see than this list but these are the main ones. Words to the wise, if you have FOMO by all means go and tick them off your list but aside from the Gibson steps, I wouldn’t treat them all as a put yourself out kind of job.

I’m not saying they aren’t all fantastic, they are! But just like all the temples in Thailand are fantastic, if you overdo it you’re not going to enjoy yourself or appreciate it. Anyway’s here the list:

The 12 Apostles was funny, everywhere else was full of maybe 20 tourists or so but this place? Full of Asian tours and buses from the city! Crazy busy! Strangely enough, we bumped into a guy we had met on a previous trip around the Whitsundays! Small world.  Hopefully, all his visa stuff has sorted itself out, sounds like he was lucky to get back to Oz! All the best to him!

Finally, we arrived at the end of our journey, it took three days in total, which I think is enough (especially if it’s summer and you’re camping in the car). Even down South, it was hot.  We stopped at Warrnambool which was pretty much dead and closed by 8pm. We almost didn’t get into the campgrounds! Nearly getting turned away!

I would have like to go to Port Fairy but our time was up and I was looking forward to our comfy motel bed in Moree, plus get rid of the car in time to leave Australia.  Saying that if I was ever to come back to Australia it would be Melbourne and the Great Ocean Road. 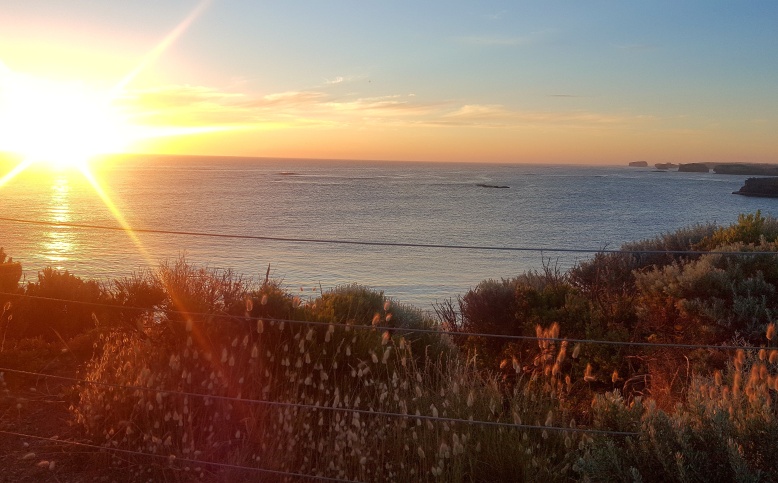 P.s We definitely left the best of Australia until last in my opinion.